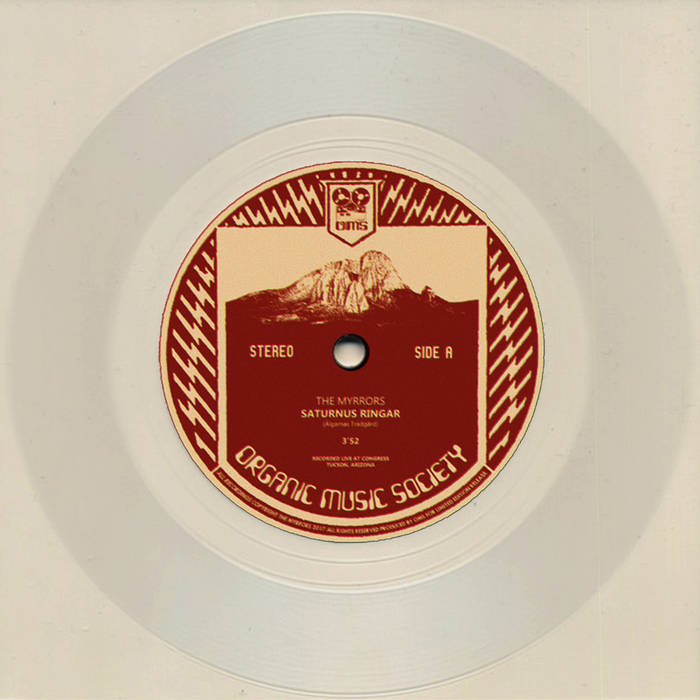 Two fuzz-drenched, in-the-red live documents from the early years of the band's second incarnation (2014-2015). A surging, amped-up cover of "Saturnus Ringar" by Swedish underground legends Älgarnas Trädgård is taken from one of the band's many shows at Tucson's landmark Hotel Congress. The flipside is an excerpt of an early live take on the band's "Eyes of Copper," an instrumental jam dating back to the group's very earliest years (before the release of their first record) but also found in a re-recorded studio form on the Evil Hoodoo benefit compilation For Nepal.

This release is an extremely limited-edition, handmade lathe record, cut on vintage, refurbished machines by Lock Grooves, part of Tucson's renowned Lathe Cut Collective. These records are each made individually, locally, and in real time and are perhaps to be thought of more as art pieces than conventional 45s.

These records do not always play well on all turntables, especially cheap turntables without a weighted tonearm. However, they have all been play tested to make sure that they track on a properly weighted record player. Lighter tonearm weight and neutral anti-skating works best. Sometimes the needle will get caught in between the grooves and sound awful. You can usually gently nudge the needle sideways into the bottom of the groove, which should fix the problem. Inexpensive players with red cartridges/needles in particulars tend to have more problems than professional cartridges.

Please keep in mind that these are not nearly as high-fidelity as conventional vinyl records, but will not damage your needle!

Bandcamp Daily  your guide to the world of Bandcamp

outré black metal, with a Victory Over the Sun interview and music from Liturgy and Jute Gyte.